I’ve been super-busy this November, once again participating in NaNoWriMo.

Unfortunately, my hands get sore after a long day of writing, so I’m mostly doing updates on Twitter, because it’s so much faster than a blog post.

Find me on Twitter @canadiansuzanne, which is also my NaNoWriMo codename.

If you’ve signed up to participate in the gruelling glory, feel free to add me to your list of writing buddies. 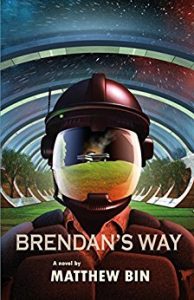 “Brendan’s Way” is a true page-turner Science Fiction novel. From the moment that the main character, Brendan, boards the Imram to begin his three-month journey to a new world, his every moment is filled with confusion and novelty. As he explores the bustling market, the corridors of the Ring, and the confines of his curtained cubicle, he meets a legion of unusual characters, all travelling in the bowels of the ship, a modern-day vision of steerage on the epic ocean liners of the past.

To earn a ticket on the Imram, Brendan agrees to pose as the husband of Neala, a sharp and secretive woman with plans of her own. The more he gets to know her, the less he understands his fictitious wife.

Before leaving his Irish home, Brendan dabbled in activism by enlisting in the Farmers’ Collective. It wasn’t a union, more of an organized local group with ties to a distant national assembly, its members trying to find better ways to bargain for fairer grain and fertilizer prices. But on the voyage, many clandestine groups exist, all with their own agendas, all somewhat aware of one another’s presence, and all trying not to get caught since justice means a one-way trip through an airlock.

Bin paints a foreign, bleak, and dangerous vision of the journey, including the ugliness of once-a-week shower access, the bland putty-like cubes of rations, the flea-market-by-day and vice-den-by-night crush of the market, and the warm yellow lemony drink offered for free in the common room. The deeper I dove into the story, the further I was engulfed in Bin’s complex microcosm of society, feeling as desperate as the protagonist to unearth the truth.

Bin deftly keeps the reader engrossed by his interpretation of future-Earth, so similar to the one we all know and yet as foreign as a new-found land. Whether you’re a fan of mysteries, science fiction, or adventures, you’ll enjoy “Brendan’s Way” from the first page to the last.

The schedule for The 39th International Conference on the Fantastic in the Arts (AKA ICFA) arrived in my inbox.

I hope to see some of you there!

Since my “Hellmaw” novel from the Ed Greenwood Group is no longer available for sale, I decided to update the look of my website.

Enjoy the visit. I’m going to open up the comments, after a long era of them being closed.

Let me know what you think…