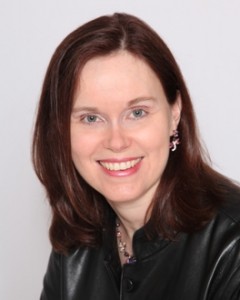 Suzanne Church grew up in Toronto, moved to Waterloo to pursue mathematics, and never left town. Her award-winning short fiction has appeared in Cicada, Clarkesworld, and several anthologies, including “year’s best” and “big book”. Her favourite place to write is a lakefront cabin, but she USED TO settle for any coffee shop with WiFi and an electrical outlet. During the pandemic, she purchased an espresso machine to imitate the cafe experience at home. *SafetyFirst*

After attending A.C. Crispin’s writers’ workshop at DragonCon in Atlanta, Georgia in 2000, she focused on writing. Subsequently, she attended James Gunn’s writers’ workshop in Lawrence, Kansas in the summer of 2004 and she graduated from the Clarion South Science Fiction Writers’ Workshop in Brisbane, Australia in 2005.

“I wish I had more time
to linger in the sun,
to organize writing shinny with friends,
to read, to edit, to sleep.
Basically, I need more time.”

Her writing runs the gamut from horror to science fiction to fantasy, including several appearances in magazines and anthologies. Some of her more memorable characters frequent the Couch Teleportation Universe stories, three of the twenty-one stories collected in her Aurora Nominated book Elements. Once in a while, talking chickens invade her brain.

The Region of Waterloo Arts Fund and Ontario Arts Council have generously provided grants to allow Suzanne to pursue her passion.

As a member of the Ontario Chapter of the Horror Writers Association, Suzanne occasionally participated in the Great Lakes Horror Company Podcast, which is no longer actively updating.

She has worked many jobs including actuarial student, computer programmer, and high school math teacher. For many years, she stuffed a pencil behind her ear and worked as a reporter for the Daily Dragon, the official newspaper of DragonCon