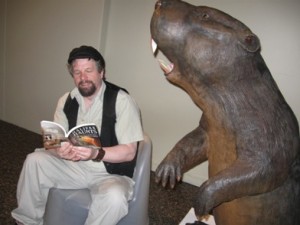 Growing up in Northern Ontario, Steve Vernon learned the storytelling tradition from his grandfather. Steve’s regional books include The Lunenburg Werewolf, Maritime Murder, Haunted Harbors, Wicked Woods, the children’s picture book Maritime Monsters, and the YA novel Sinking Deeper – or my questionable (possibly heroic) decision to invent a sea monster – a novel which begins with a jailbreak, seguing into an impromptu Main Street midnight caber toss leading to the invention of a sea monster, a gumbooted dragon dance, a couple of ghosts and an inadvertent assassination attempt on David Suzuki himself.

In addition to his regional books Steve has released over thirty independently published e-books including Hammurabi Road – a tale of Northern Ontario redneck noir revenge and Long Horn, Big Shaggy – a tale of Wild West Terror and Reanimated Buffalo.

Suzanne Church: You refer to yourself as a storyteller. Did this moniker grow organically from writing primarily for young people – or is there more to your story?

Steve Vernon: Actually I am an oral tradition storyteller, telling stories from audiences ranging between 5 to 5000 spectators. I re-tell old legends and ghost stories and fables and pretty much anything worth re-telling. The funny thing is – up until about the age of thirty – I was as quiet as a duct-tape-gagged mouse. I grew up painfully shy. It took a year or so in Toastmasters to bring me out of that whole shy stage in my life and I have not shut up since.

My very first regional collection – Haunted Harbours: Ghost Stories from Old Nova Scotia (Nimbus Publishing 2006) originated from my storytelling background. I first met with the publisher at a Word On The Street Festival in 2004 when I took part in the very first Pitch the Publisher session in which – they tell me – that my pitched story collection was the ONLY book to make it through the pitching session and into publication that year.

SV: I’d LOVE to write something else for Nimbus Publishing. They’ve been great to work with and have approached me for another novel. Although I have embraced the indie publishing revolution I still enjoy writing for the traditional market – primarily because Nimbus can get my book into an awful lot of bookstores across the Maritimes and even across Canada itself.

SC: Since you’ve embraced the mysterious abyss that is the world of e-book publishing, tell us about your experience with publishing Uncle Bob’s Red Flannel Bible Camp, Flash Virus, and Sudden Death Overtime.

SV: Well – to tell you the truth I am still figuring out the whole digital publishing business. I make money at it every month but not enough for my liking. Don’t think of me as being greedy, you understand. It is just that writing – to me – has ALWAYS had a practical side. I don’t write JUST for the money – but it certainly is an important measure of an author’s success. Some may argue the point – but the way I see it, an artist ought to be able to justify his acts of creation. Besides, I’ve got bills to pay – LOTS of them.

Don’t think of me as a money grubber, though. The fact is, if I had wanted to get into something JUST for the money I probably would have got into dentistry or maybe even politics.

SC: If your characters were real people, which one would you choose to interview first on your blog? Why? 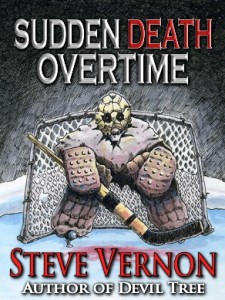 SV: I think I’d have to interview Sprague Deacon – one of the toughest old-time hockey players who ever skated upon a backyard rink of hand-poured ice. Sprague was born and raised and he expects to die someday on the shores of Northern Labrador. Sprague is one of my favorite characters because of his tough old-school no-nonsense style. He is a man who does not know how to back down from a fight – so when a tour bus full of vampires pulls into his town and begins lowering the population level one corpse at a time it is no surprise that Sprague and his buddies decide to go toe-to-toe with the bloodsuckers in a no-holds-barred game of hockey.

Sprague appears in my indie-published novella Sudden Death Overtime – a book that is just SCREAMING out to be made into a Canadian independent horror flick. I think he is one of my best efforts at capturing the unique timbre of the voice of the Atlantic Maritime storyteller.

SC: You and Colleen Anderson co-edited Tesseracts Seventeen – Speculating Canada Coast to Coast to Coast for EDGE Science Fiction and Fantasy Publishing – the publisher of my own collection Elements. What was the hardest lesson you learned during the editorial process?

SV: That I needed better glasses? Four hundred odd manuscripts – and some of them were VERY odd indeed – was hard on the eyes.

But aside from just the struggle with the demographic limitations that a cross-Canada selection presents, I found that the work involved was incredibly daunting. Editing is a LOT harder than writing is.

SC: Describe two aspects about living in the Maritimes that’ve influenced your prose.

SV: We’re a quiet province. Almost a dying province – in spite of all the propaganda that the tourism offices produce. Our young people are moving west and south. Aside from Halifax, the rest of Nova Scotia is dwindling in population. The market here is intensely limited.

Still, there are benefits to be found here in Nova Scotia. We are definitely a province of storytellers. No one can spin a yarn like a Maritimer. The glitz and the glitter of the 21st century still hasn’t caught up with this province I live in. It is almost as if we live one step behind the rest of the country – and I like it that way.

Besides that, there is something intensely powerful and compelling about living so close to the deep Atlantic. I have hitchhiked from one end of this country to the other and there is nothing that can compare – not even the Pacific Ocean – to the deep and almost elemental call of the Atlantic waves. They are both lodestone and heartbeat and I can feel the tidal pull echoing deep within my veins. 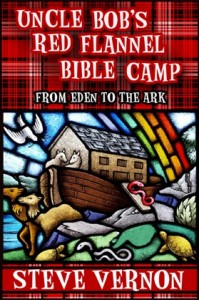 SV: I am currently working on the second book in a brand new series that I call Uncle Bob’s Red Flannel Bible Camp. The series retells the stories of the Old Testament in a more comfortable, countrified style. I wrote it thinking about the way that my grandfather and uncles would tell me some of the legends and tales and bible stories in their own unique fashion – rather than just reciting from the Bible.

You see, to me, those old boys – Adam and Moses and Abraham and Cain – were most likely folks like you or me. They didn’t REALLY know that they were supposed to be biblical. They were just trying to get on with their day and do the very best they could – just the same as you or me.

SC: Are you working on anything in the fantasy/horror genre?

SV: As a matter of fact I am working on completing a new novel based on the ideas from my Sasquatch story “Three Thousand Miles of Cold Iron Tears” originally published in Tesseracts 16 – Parnassus Unbound, edited by my good buddy Mark Leslie Lefebvre. This novel entitled Big Hairy Deal should be completed within the next month or so and I look forward to launching it out into the world.

SV: It’s cold. Cold like the Canadian winter. Cold like the thousands of pounds of snow I have shoveled over my lifetime. As far as I’m concerned, paradise has got to have a beach and some serious sun-tanning weather involved.

SV: Lobster is messier. I like pan-fried scallops – preferably wrapped in bacon.

SV: Laptop? I am old school. Laptops are way too dinky for my labor-enhanced meat hooks.

SV: I usually like it quiet – but I have written to music before. I wrote one entire novella while listening to a collection of Godzilla soundtracks.

SC: Thanks to Steve Vernon for participating in this blog tour!