It’s Not Easy to be Fuzzy or Green

Sitting in the 10th slot in the Table of Contents is the last of the Couch Teleportation Universe stories: “Fuzzy Green Monster Number Two”

My third story in the Couch Teleportation Universe examines the definition of a monster. Fuzzy  was originally published in Neo-Opsis Magazine, Issue #12. 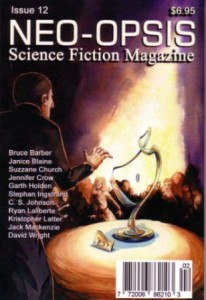 Greenie is a teenaged Strunjox–a towering green beast with a long snout and sharp claws. His species are native to the desert planet Deslot, a world where drug trafficking is the source of employment for more than half the population.

Before the story begins, Greenie has scrounged enough money for a one-way couch-teleporter ticket to Earth, where he hoped to find a better life away from the desperation of drug addiction that permeated his home culture.

Instead of prosperity, he finds discrimination and a lack of employment for sentients without opposable digits.

With Fuzzy Green Monster Number Two I wanted to tell a story from the monster’s point of view. Greenie doesn’t consider himself a monster at all. He’s simply a Strunjox  trying to blend in among the humans.

As Greenie’s circumstances evolve, I wanted the reader to re-examine the definition of a monster. Like many fables, I wanted to ensure that the reader’s initial interpretation of a beast’s outward appearance didn’t coincide with what they learn as they peel away at the layers beneath the surface.

Science Fiction is a genre designed to nudge the reader to interpret the social hierarchies of our own lives through an approachable and entertaining lens.

In 1992 I visited Los Angeles almost exactly one month after the riots.

And while the timing wasn’t ideal for a visit, I was continuously amazed by the dichotomies of the city: incomparable wealth on one side of the razor-wire fence and abject poverty on the other.

That’s why I set Fuzzy in LA; to examine the contrast between haves and have-nots. But also because the legends and social references to the city are so ingrained in North American culture.

On the day I visited the Sunset Strip, I spotted a man wearing a cardboard box covered in aluminum foil on his head. The front of the box had been cut open, and knobs had been drawn on with marker, making the end-product look like an old-fashioned CRT television. He’d also attached an ancient broken antenna to the back.

That dude (whatever his name) makes an appearance in Fuzzy:

. The sidewalks in this part of the city were crowded with eccentric humans and a variety of aliens. One man wore a cardboard box over his head that looked like a vid.

I hope that dude is still alive today, wandering around LA with a cardboard flatscreen on his head. 🙂