Sitting in the 5th slot in the Table of Contents is: “Courting Ice”

I live in Canada and my writing can’t help but be affected by our seasons, particularly winter.

“Courting Ice” takes place in the fictional Daslak. When I wrote the story, I imagined Daslak  as a remote area of Newfoundland. I’ve never visited the province, but I’ve longed to go. Who wouldn’t when so much of the province is absolutely breathtakingly gorgeous?

Here’s a picture of Goose Cove that I downloaded from These things happen. 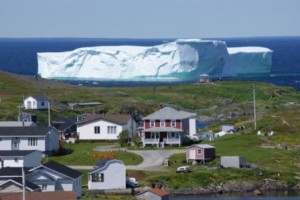 Nothing like the vista of rock-dominated landscape with a striking iceberg floating past the shoreline.

In the story, Faya is an ice courter. She uses her gift to coax icebergs to shore where the ice is carved into pieces that are used to preserve food.

This courting gift runs in Faya’s family. Her grandfather courted ice and her mother courted water.

Faya’s mother’s gift drew her to the sea. And as anyone who’s worked on the Atlantic in winter knows, the ocean can be a dangerous place to earn a living.

To an ice courter like Faya, all frozen water was uniquely magnificent, from the great bergs that floated past the cape to the thin skins on late autumn puddles. She adored her gift, for it allowed her a connection as splendid as the love she had once shared with her long dead mother. All her life the ice had proven pure and true, until the spring when she fell in love.

We Canadians consider it a national pastime to complain about winter, and I’ve done my fair share during this year’s particularly difficult winter in Ontario. But seriously, I can pretty much guarantee they’ve had it worse in Newfoundland.

Newfoundland was the last province to join Canada on March 31, 1949 and on December 6, 2001 the Canadian Constitution was amended to change the official name of the province to Newfoundland and Labrador

As many of you know, I love hockey, and the best place to watch hockey is on Hockey Night in Canada (HNIC) on the CBC. During the opening montage at the beginning of a HNIC broadcast, they play a clip from the late great Foster Hewitt. And when the clip was recorded, Newfoundland was not yet part of Canada, so he opens with:

Hello Canada and hockey fans in the United States and Newfoundland