Sitting in the 18th slot in the Table of Contents is: The Needle’s Eye, winner of the Aurora Award for Short Fiction (English) in 2012.

I became fascinated by the global effort to eradicate Smallpox from Earth after reading Scourge: The Once and Future Threat of Smallpox. That research inspired me to write a story where scientists used components of the Smallpox virus to generate a biological weapon that caused blindness.

And so Retiniapox was born.

I’m still not certain if scientists have made the right decision to maintain Smallpox samples at various Biosafety Level 4 Laboratories. But if I spend too much time thinking about BSL4 protocols, I’ll never sleep again.

Originally published in Chilling Tales: Evil Did I Dwell; Lewd I Did Live, The Needle’s Eye  imagines a world where a genetically engineered virus has been used in a Middle Eastern skirmish…

A biological weapon of war, the virus had been designed to blind its victims, rendering an opposing army helpless. Nature, in its random cruelty had mutated the pathogen to a deadly cousin of Smallpox since its introduction in the battle of Baqa el Gharbiyye.

I don’t come right out and name the medical organization that Lise and Rideau work for in the story, but in my mind they work for Medecins Sans Frontiers / Doctors Without Borders (MSF/DWB).

MSF/DWB does great work. If you’re searching for place to share your charity cash, check out their site to learn about the countries where they’ve made a difference.

MSF/DWB was established by a group of French Doctors and their French name is always listed before their English name. That’s why I decided to make my two protagonists Francophone doctors from Montréal. 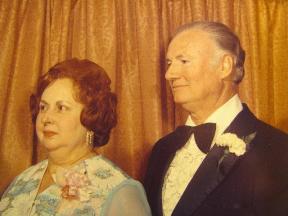 My paternal grandmother Dorothy and her second partner Tommy were both Francophone (one from Quebec and the other from Northern Ontario). I have many fond memories of hearing them speak French whenever they didn’t want us grandkids to understand what they were talking about.

I still remember one time, right around my 10th birthday, when I heard them say a word that sounded like either “cadeau” (present) or “gateau” (cake).

I piped up and said, “Hey! You guys are talking about my birthday, aren’t you?”

They looked at each other in frustration and then laughed. 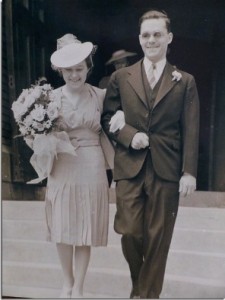 My maternal grandparents (Rea and Ella Beacock) were both blind. They met at the Ontario School for the Blind (now called the W. Ross Macdonald School). At that time (late 1920s) the students were not permitted to fraternize since back then, two blind people were considered to be “incapable” of looking after children. They snuck around, as teenagers will do, and their clandestine tomfoolery blossomed into marriage.

Ella was an accomplished pianist. When she passed away, Rea established a memorial fund to help pay to have sheet music translated into Braille. While the fund has moved around, it’s currently housed at the Glenn Gould School, Royal Conservatory of Music, Toronto.

Read more about the Rea and Ella Beacock Memorial Fund (scroll down to page 6), another good place to share your charity cash.