Sitting in the 3rd slot in the Table of Contents is: “March of the Forgotten”

I spend at least half (if not more) of my writing time at Starbucks, because
(a) they allow me to linger as long as I like
(b) they have electrical outlets so I can plug in my laptop.

To do my part for the environment, I use travel mugs. (Why not save the ten cents?) One of my favourite mugs looks like this: 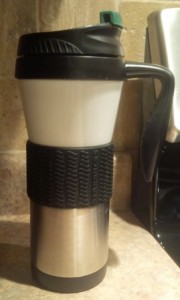 So one day, while I was sitting in Starbucks trying to decide what to write about, I made up a story about my mug coming to life. Not a full-on Brave Little Toaster type of life, more like partial consciousness and mobility. Enough intelligence to be self-aware, and enough mobility to march in a circle as a form of entertainment.

In March of the Forgotten  lost objects march around the food court at the mall, in the hopes that their owners will notice and reclaim them. A high-tech lost-and-found.

In the summer of 2004 I attended a short fiction writers’ workshop at the Gunn Center for the Study of Science Fiction in Lawrence, Kansas.

A bunch of the students used to make coffee runs to Starbucks, a place I’d previously NEVER bothered with because I thought they only sold coffee and I don’t drink coffee.

So I’m in Starbucks and I discover that they do sell other drinks like tea and frappuccinos. Oh, blessed is the strawberry frappuccino  especially with whipped cream topping.

My fellow students hooked me on Starbucks for life! And not only that, one of my pals had an awesome Starbucks mug, which miraculously didn’t leak  and kept my beverage warm for hours.

I bought the same mug. That mug was Sebbee’s predecessor! 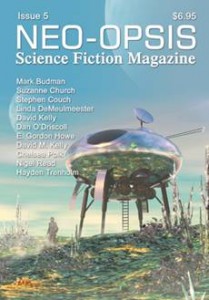 Sitting in the 1st slot in the Table of Contents is: “Coolies” 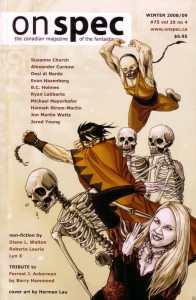 Coolies  is the first story in ELEMENTS, and one of my personal favourites, probably because in it, Canada  is at war with the United States. Crazy, right? Why would the little guy take on their big neighbour to the south?

And here’s the kicker: we’re winning!

I wanted to explore the idea that our two countries would be so polarized on an issue that we would take up arms. In this case, the issue is the existence of stem cell factories where organs and other body parts are grown for surgical transplantation.

Near the Alberta/Montana border, we meet Marvin, a sergeant in the Royal Canadian Regiment who leads a coolies detail–soldiers responsible for harvesting organs in the battlefield.

Since our armed forces already make so many sacrifices for our country, I thought I’d push their sacrifice one level deeper. In the few minutes after their deaths, their bodies can be used to save their wounded comrades. 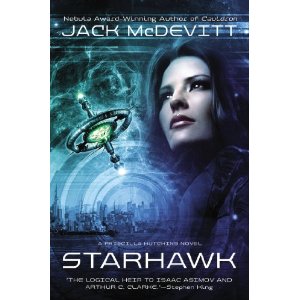 Before I finished writing Coolies  I read the first few pages aloud at Con*Stellation a convention in Huntsville, Alabama.

The amazing and talented Jack McDevitt was in the audience.

After we all finished our readings, Jack told me he loved the story and couldn’t wait to read the rest.

His enthusiasm gave me the drive to finish Coolies  and to not give up on submitting until I sold it to OnSpec.

I’ve always enjoyed learning how authors create the stories they publish, and I’m not alone. It’s no surprise that the most popular question authors hear is, “Where do you get your ideas?”

To answer that question in my own way, I’ve added extra content here on the blog as a bonus for my readers.

Elements  contains 21 short stories — 14 reprints and 7 new to the collection.

Introduction “What Becomes a Legend Most” by Sandra Kasturi

The Wind and the Sky
Originally appeared in Neo-Opsis Science Fiction Magazine, Issue 5 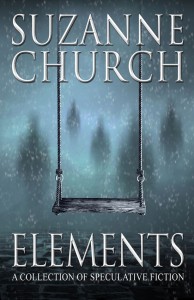 March of the Forgotten
New to the collection

Courting Ice
New to the collection

Jelly and the D-Machine
New to the collection

Everyone Needs a Couch
Originally appeared in Oceans of the Mind, Fall 2003

Synch Me, Kiss Me, Drop
Originally appeared in Clarkesworld, Issue 68, May 2012

Mod Me Down
New to the collection

The Needle’s Eye
Originally appeared in Chilling Tales: Evil Did I Dwell, Lewd I Did Live, EDGE Science Fiction and Fantasy Publishing

The Flower Gathering
New to the collection

Muffy and the Belfry
New to the collection

Soul-Hungry
New to the collection

Order “Elements: A Collection of Speculative Fiction” at Amazon.com.

Ongoing appearances for Suzanne Church and her book Elements:

Suzanne will be reading at the monthly ChiSeries Toronto event on June 18th at the ROUND Venue (152A Augusta Ave) starting at 8:00PM.

Held on the third Wednesday of each month, the ChiSeries Toronto events are run by ChiZine Publications and take place in Toronto, Ottawa, and Vancouver.

For more information about this event, visit the ChiSeries Toronto page or check out the Appearances page on this site.

Suzanne will be speaking at the FREE, one-day convention GenreCon in Sarnia, Ontario on Saturday, May 10th, 2013.

All of Suzanne’s upcoming convention and launch event details are on the Appearances page.

Elements is now available at Amazon.ca

Suzanne Church is a shining new star in the Canadian science-fiction firmament. Her wonderful stories will move and delight you.

Suzanne Church’s fiction is charming, dark, powerful, and stylish, sometimes all at once.

—Kij Johnson, Nebula winning author of At the Mouth of the River of Bees: Stories

Suzanne Church is a bright new star on the speculative-fiction horizon. I’m very excited to see this mesmerizing collection, which shows the fabulous range of Suzanne’s talent and includes ‘The Tear Closet,’ one of my favorite stories in recent years.

Alien world after different setting, and in all of them, you are right there, up close and personal. Feeling, understanding . . .

This is not just another collection of stories! Yes, there’s an Aurora award-winner here, but every last tale in this book is a powerful glimpse of a reality very different from our own. Some of these glimpses are dark, some wry—but all of them are rides both unforgettable and worth taking.

You’ll read some of them many times. I guarantee it.

These stories grab hold tight, and hang on for dear life. And beyond.